DELHI COMMISSION FOR WOMEN PRESS RELEASE
The Delhi Commission for Women has rehabilitated Shazia (name changed), a 13-year-old girl who was trafficked from her home in Nadia district, West Bengal, as on the 4th of December 2015. She was shifted from a shelter home under the custody of the Child Welfare Committee, Faridabad to a government shelter home in Delhi. Upon trafficking her from her village, the trafficker reportedly raped her around five times in order to break her will, after which she was transferred to various facilities in New Delhi like Laxmi Nagar and Shastri Nagar. These places, according to Shazia, sold her all night and she met approximately 20 men every day whose ages range from 18-80 and each would rape her around 5-6 times, even when she was sick or unable to respond. The victim was brought in to Faridabad police approximately 20 days before she was rescued because in the process of her being transported to a client, she got lost in the metro and the Faridabad police subsequently found her and transferred her to the local CWC.The Chairperson of DCW received information regarding this 13-year-old girl from an Shakti Vahini, an NGO devoted to rescuing victims of human trafficking. She immediately assembled a team headed by Ms. Sarika Choudhary a member of the DCW and comprising DCW counselors and representatives from Shakti Vahini to aid the transfer of Shazia’s case to Delhi jurisdiction so that charges could be filed and all due-diligence can be done. In addition, they wished to assess her status and ensure that she will be rehabilitated. The team was shocked to find that the CWC had not performed an MLC or filed an FIR for over 20 days. Shazia was willing to cooperate and provide us the location of the trafficking racket that ruined her life.The Chairperson of DCW, Ms. Swati Maliwal had spoken to Mr. Deepak Mishra, IPS, Senior Special Commissioner (Law and Order) and constituted a team consisting of DCW members, Shakti Vahini and Delhi Police to crackdown the trafficking racket in places mentioned by Shazia. Unfortunately, as a result of the delayed response of Faridabad CWC, traffickers got to know of Shazia’s whereabouts and had cleared all evidence from areas that the team raided. As a result, nothing was found. However, Delhi Police is pursuing the case and it is hoped that the traffickers will be brought to justice soon.It is disappointing to note that although there is a special police unit devoted to anti-trafficking, the groundwork, tip-offs and fact-finding are done by NGOs, which have far lesser personnel and technology. Clearly, the police must step-up its efforts to ensure that such children are not abused in the manner that Shazia was. Shazia’s case has now been registered in New Usmanpur and an MLC was also done. She has been rehabilitated to a safe shelter and has been reunited with her family.
The Police have arrested one Person while search is on for tracing the other accused. 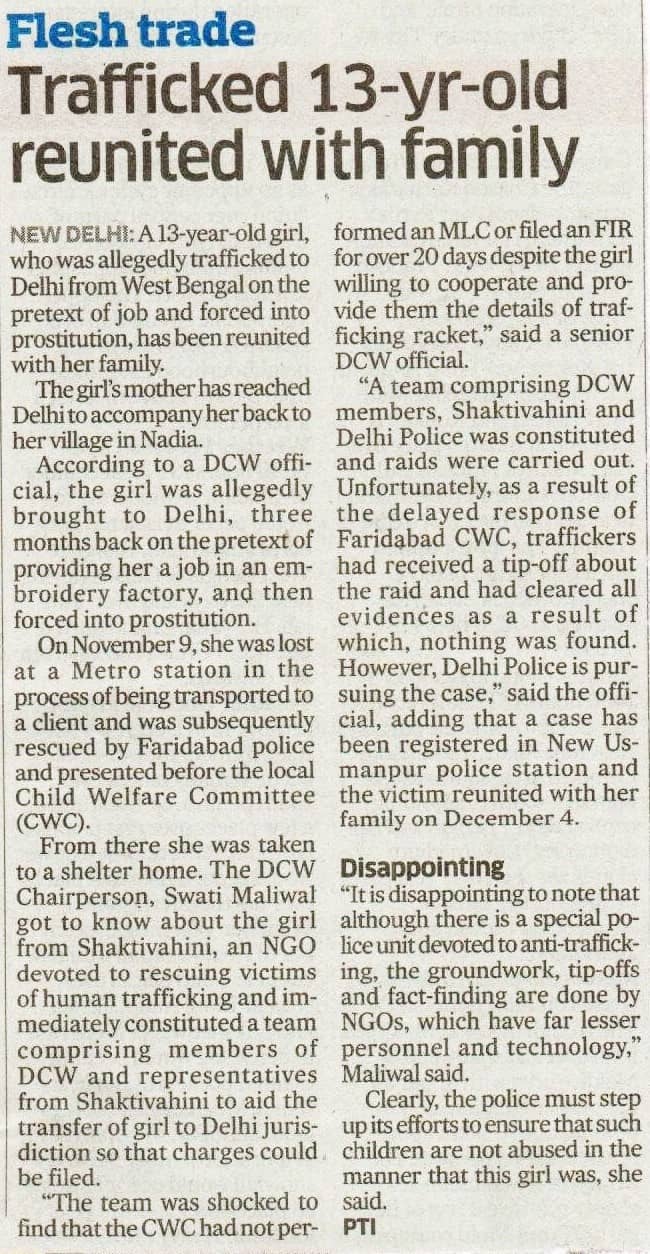