While we are surrounded with news of injustice and exploitation of the poor, downtrodden and women, it is heartening to the extent of extreme gratitude to see people making society just, free and equitable society a mission of their lives. What is even more heartening is to see men striving to give voiceless women voice!

Shakti Vahini, co-founded by the Kant Brothers in 2001, works towards combating human trafficking and violence against women and children in India. Headed by Ravi Kant, its president, Shakti Vahini is strongly supported by Nishi Kant, its executive director, and Rishi Kant, a social activist.

The Kant brothers have been doing this inspiring work, that they equate with being a part of mother goddess’s brigade to fight injustice, for more than 10 years now. Starting from getting the plight of abused women acknowledged to lending a strong voice on policy and legal changes to combat violence against women and children in India, the Kant brothers has done exemplary work in the field.

“We all come to know of horrendous stories about crimes against women, rapes, forced labor etc. It touches each and every one of us and everyone is responsible for making society a just and safe place to live. We all need to do something!” says Nishi.

Ravi points out that challenges are even bigger in the large hinterlands of the country where awareness and media outreach is far less.

To ensure fair implementation of the law, Shakti Vahini has been proposing legislation, demanding that laws be enforced, improving access to services and empowering victims to take action.

Explaining further, Ravi says, ”Law enforcement agencies like the police need to be sensitized to deal with crimes against women as they are the first response agencies.”

Shakti Vahini has been involved in training of more than 6,000 policemen across India, and has developed specialized training units and intervention teams to work closely with the police.

Kants also work through the law courts and through political advocacy. Shakti Vahini has prepared a report on honor killings for the National Commission for Women, and Ravi has been a member of the Central Advisory Committee to Combat Trafficking and in 2011 was appointed by the Supreme Court in a panel to rehabilitate victims of sex trafficking in India. He is also an advocate at the Supreme Court of India and has worked on public and pro bono litigation cases.

Shakti Vahini is supported by a strong professional team, best known for its work on rescues, interventions to repatriate victims who have been trafficked and give them back their lives. Seeing an oppressed life go back on track is what keeps them going.

“When we rescue a girl child, she expresses her willingness and desire to have a happy life,” says Rishi. “That is what makes us feel so motivated.”

“Every girl you rescue has a story, how they were exploited — personally, sexually, physically, mentally. A trafficked girl has no ability to express her emotions. You have to stand with her. Our responsibility is to give voice to the voiceless.”

The brothers put together an admirable mix of skills and outlooks. Shakti Vahini’s strength liesin building partnerships, engaging with other groups — government, police, judges, prosecutors — even while trying to change the way the country works.

“When I talk about patriarchy — law-enforcement, administrative officials, the state government, the law makers, they all have the same patriarchal views,” he says. “We have to fight the mindset of society.”

They are completely aware of the magnitude of the work they have taken up as well as the force of opposition. On the other side are powerful organized groups with best of lawyers to defend them. They have been threatened and attacked physically and legally in the past.

“But we know that once we’re on the right path we have to go ahead,” says Ravi. The brothers feel that the best response to these attacks by organized crime is persistence and transparency.

Breaking stereotypes and a slumbered state of apathy towards issue related to women and children, Kant brothers kindle the hope that access to justice is available to everyone as a basic human right, as it should!

“We have to work with the system while fighting the system.” 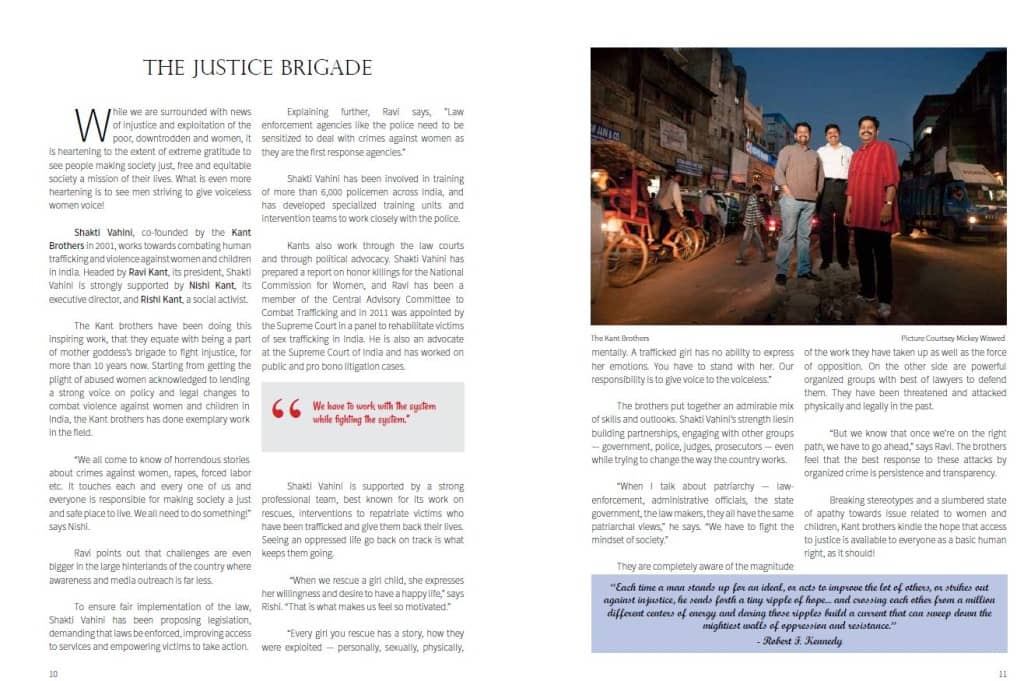