Posted on October 25, 2014 Posted By: ravikantsvCategories:

Search For Pannalal and His Wife

On 13th October, Panna Lala’s Sister in law Gayatri was arrested for illegally bringing minor girls from Jharkhand and then selling them off in domestic Slavery. Gayatri was also a named accused in a FIR in Jharkhand. Fearlessly, she was running a Gayatri placement agency in M Block, Shakurpur, Delhi and operating from there.

On 13th October, 2014 a raid was conducted by Jharkhand AHTU team and Delhi Crime Branch along with Shakti Vahini (for search of trafficked victims) in which Gayatri was arrested. She was produced in Rohini court same day and was later taken to Jharkhand.

A search for Panna Lal and Sunita was also conducted at different hideout of Panna Lal in Shakur Pur but the couple was not found. Meanwhile a strong informer network was developed by Jharkhand AHTU in Shakurpur to get the details of Panna Lal and his wife.

Arrest of Pannalal and His Wife

Jharkhand AHTU S.I Aradhana Singh kept a watch at the house of Panna Lal in Shakurpur through informers. Getting a tip off from the informer about the whereabouts of Panna Lal and Sunita, Sub Inspector Aradhana Singh immediately Co-ordinated with Delhi Crime Branch and a raid was conducted early morning at Panna Lal’s residence in Shakur Pur and both were arrested on 19th October, 2014.

Jharkhand AHTU team reached Delhi to take the custody of Panna Lal and Sunita. With no remorse on their faces, the Couple was produced before Duty Magistrate, Rohini Court at around 2:30 P.M and were sent to Tihar Jail. Jharkhand AHTU will be given the custody of the couple in their next production before the court.

Panna Lal and Sunita were running more than 200 illegal placement agencies with different names in Delhi whereby they were bringing minor girls from Jharkhand and were selling them as domestic slaves with an advance payment of Rs 20,000 to Rs 30,000/- per girl, in the affluent house of Delhi.

Panna Lal and wife Sunita used to target the minor girls and the most vulnerable families of remote and tribal areas of Jharkhand. Once a girl is being targeted, she is lured with false promises of marriage, good job, education or good life. Families were also given assurance that the girl will be given a good life and her salary will be sent to them every month. After the girl is being taken to Delhi, she is confined and placed into houses by these placement agencies of Panna Lal, to work from early morning till late nights without any break or holiday. The salary of the girl is also taken by Panna Lal. Every girl is placed in a house for 11 months and was then after 11 months she is further placed in other house. Victims are not allowed to go back to their home or to meet their relatives.

The trafficking victims were exploited not only by these persons but also by their employers. Those who are fortunate enough get rescued by Police or anti-Trafficking organisation while other stay confined as slaves.

Delhi has rapidly become a hub for placement agencies in past few years. Areas like Tughlakabad, Ranibagh, Punjabi Bagh, Shakurpur, Shakarpur etc emerged out as centres for these placement agencies. There more than 10,000 placement agencies illegally running in Delhi and more than 4000 of these agencies are situated at Shakurpur only under the jurisdiction of Subhash Place police station. While a very small number of these agencies are registered under Labour Department but they have not comply with the rules yet. There is no law to regulate these agencies so far due to which these agencies are fearlessly trafficking minors from States of Jharkhand, Bihar, Assam, West Bengal and Orissa. Even if an agency is raided and closed down, the agents get away easily and reopen a new agency with different name and address and the never ending cycle of exploitation of minor girls continues.

Jharkhand C.I.D, last year handed over a list of 240 agents and agencies running illegally in Delhi and involved in trafficking minor girls from Jharkhand, a copy of which was also given to Shakti Vahini. The names of Panna Lal and Sunita were also exposed in the list. The Jharkhand police was looking out for these two traffickers since a long time and with the arrest of Panna Lal and Sunita, Jharkhand police hoping that many other names may come out.

Placement agencies are playing a major role in trafficking minor girls as well as children for the purpose of labour, sex slavery and forced marriages. The traffickers have changed their modus operandi with the changes in law and society.

In most of the cases the trafficker is known to the victim who convinces the victim and her/his family and further sell them over to placement agent. The placement agencies generally recruit a person to target the girls and then pick them up (By luring or sometimes by kidnapping) and bring them to main cities of the state. From the main cities another person come in charge and further take the victims to railway station from where they are handed over to another person and brought to Delhi. After reaching Delhi, the victims are further handed over to another person and brought to Placement agencies.

Some victims are then placed in various houses as domestic help with a payment of Rs 20,000/- to Rs 30,000/- , while others are sold off into forced marriages or Prostitution. The girls who are placed in houses with a monthly salary of Rs 1000 or Rs 3000 never get their wages. A girl is placed in one house for 11 months and every month the placement agencies take their salary which never reaches the victims or their families. Once a victim completes her 11 months in house, she is further placed into another house and the exploitation continues.

What can be done?

A time when, the Prime Minister of India Shri Narendra Modi is focussing on labour reforms and giving dignity to labour, the country on the other hand fails to recognise one of the main work force i.e. Domestic Labour. Domestic Labour or Domestic Worker constitutes a huge work force in India which usually remained hidden in closed doors of our houses.

Need to regulate the placement agencies

Chhattisgarh in this context has taken a vital step by becoming the first state to launch the Private Agencies (Regulation) Act this year.

Recently, on 25th September, 2014, Labour Department, Governemnt of National Capital Territory of Delhi in compliance with the order of Delhi high court in writ Petition (Crl.) 82/2009 , passed an executive order whreby the placement agencies are directed to get themselves registered under “Delhi Shops & Establishment Act, 1954” or “Inter State Migrant Workmen (Regulation of Employment and Conditions of Service) Act, 1979 before 25th October, 2014. 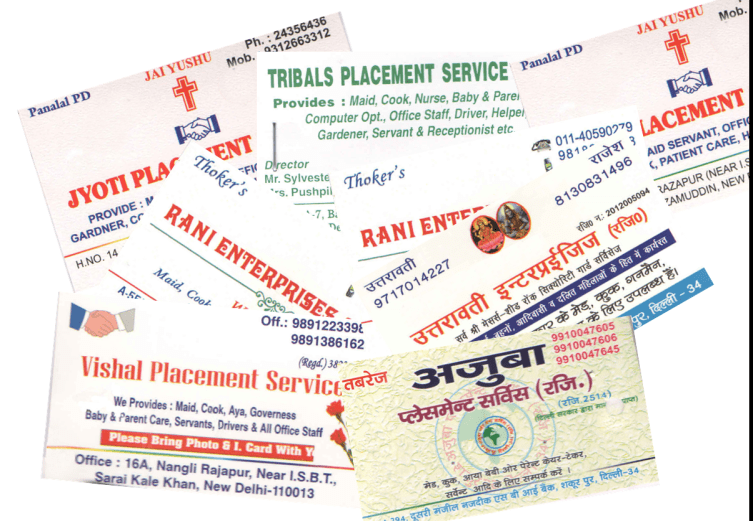 Silent Features of the Order:

A domestic worker is defined as the person who is of the age 18 years or more who performs domestic work only sporadically and is employed through a contractor.

Placement agencies shall provide the details of their details, Number of persons/ domestic workers, who are employed through them with their names, age and addresses, Details or salaries fixed, addresses of employers, period of employment, nature of work, details of commissions received from the employers.

The applicant will be given a license to run his/her placement agency after 15 days of issuance of the registration certificate by Labour department.

Every Domestic Worker will issued an attested pass book by his/her placement agency indicating name, age, address, employer’s name, period of employment, payment of wages etc.
Agreement for engagement of domestic workers by the employer through placement agency shall be in writing.

If placement agencies do not comply with the provision of the order, a penalty will be imposed or the registration/license will be cancelled to run the agency in Delhi-NCR

The Delhi Commission for Women and Child Welfare committee are given special powers and duties in virtue of the direction of Hon’ble High Court of Delhi.

Taking a strong stand against the trafficking of minors in Delhi for domestic workers and their exploitation, the order has also given power to Delhi Commission for Women and Child Welfare Committee to examine the complaints related to withholding wages not less than minimum wages, harassment or abuse by placement agencies and employers, non-compliance of the agreed terms, abusive working conditions, long working hours, lack of basic facilities etc.

Give Dignity to your Domestic help.

It is very much needed that each and every person shall come forward and give respect and dignity to the domestic help. Make sure that you are not employing anyone who is below the age of 18 years. Verify the identity of your Domestic help’s. Check the registration of the placement agency with local police. Pay the salary according to the minimum wages prescribed by the government, directly to him/her in bank accounts.

Most of the domestic worker comes from the back breaking poverty background with a hope of assisting their family in financial condition. But Irony is that the amount that we pay to placement agency as advance or as salary of our domestic help never reaches them. Hence in cases a girl is rescued and restored back to her family, have the high chances of getting trapped by the traffickers again.

RWAs have to come forward

Resident Welfare Associations (RWAs) are playing a vital role in cities like Delhi to look into the general affairs of the locality. RWAs have to take up the command to see that no child or a woman is forced to work in its locality. RWAs shall time to time sensitize residents about the Domestic helps. They shall take the responsibility of their locality and make it a slavery free locality.

Every day, Thousands of innocent children and women are being at a risk of trafficked and forced to work as slaves in and around our houses. The number of missing children and girls is increasing day by day.

We at Shakti Vahini have been actively working in bringing the victims close to the justice.